YB @teresakok IS A THIEF!

I am utterly disgusted with the attitude and actions of Teresa Kok Suh Kim, the Senior State Exco for Selangor and Seputeh Member of Parliament (MP).

Yesterday, Teresa Kok had in her press statement claimed of having in her possession the Barisan Nasional (BN) election machinery documents.

This shows that Teresa Kok will do anything to sabotage the progress made by BN in Seputeh since 2008. We have come a long way in serving the rakyat best's interest and now in order to win, Teresa Kok is stealing our election strategy.

This has not happen once, but many times before. There was one instance last couple of years when without any sense of dignity she came to a BN function and sat at the front row as though the function was organized by her.

The function was actually organized to assist the members of the Rakyat which were affected by a fire incident in their area. The event was attended by Federal Territories and Urban Well Being Minister Dato Raja Nong Chik and Seputeh UMNO Division Chief Dato Mustapha Kamal.

In addition, when the Rakyat needed her help during the freak storm that occurred earlier this year, she had hit back at the Rakyat for not lodging an official complaint to her office?

Does this reflect the attitude as a responsible MP? As an MP your job is to serve the Rakyat, even your salary is paid by the Rakyat!

With all the expose above, Teresa Kok has successfully demonstrated that she is an irresponsible MP, but now by stealing our election strategy, she is also a thief of the highest order! 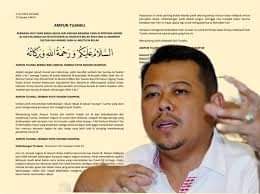